Three ways to shut down loads with thermal switches

Thermal switches can help mitigate damage in electronic products and keep a situation from getting worse. Three approaches to controlling heat buildup with thermal switches are highlighted. 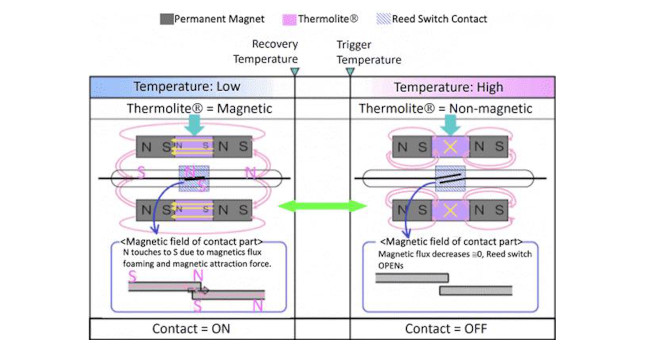 Heat is a major problem for electronics, especially in high-power applications such as industrial automation or robotics. Not only does overheating shorten the life of electronics, it can quickly lead to component damage, fire, explosions, or even operator injury.

Thermal cutoffs mitigate heat damage in electronic products. They detect abnormal temperatures and can shut systems down before any damage occurs. In contrast to a thermal fuse, which is a consumable and must be replaced after it blows, a thermal switch resets after it cools down. But before we demonstrate how thermal switches solve real-world challenges in electronics, it’s important engineers understand how they function.

A thermal switch is an electromechanical, temperature-dependent control device that breaks an electrical connection at a specified temperature. Thermal switches are often reusable and protect against situations the user can correct.

Resistance change in a thermistor can be converted into an electrical signal using a wheatstone bridge or voltage divider circuit. A voltage divider converts the resistance of the thermistor to an electrical signal (Vsens). When temperature varies, Vsens follows and the changes are read by the microcontroller’s analog input and displayed on an LCD screen.

A bimetallic switch consists of two strips of different metals with different thermal properties, generally a combination of brass with steel or copper and steel. The strips are bonded together along their length, either joined by rivets or fused. The structure’s shape can be either a flat strip or a concentric coil.

As the temperature rises, the two metals expand at different rates, bending the strip. The characteristics of a bimetal switch are useful for changeover electrical circuits, or temperature gauges where a pointer indicates the temperature on a dial. Bimetallic switches are often used in thermostats, thermometers, clock mechanisms, heat engines and more.

reed switch is a magnetic reaction-type switch containing two small Fe-Ni (iron-nickel) alloy plates. As illustrated in Figure 1, reed switches can be encased within a glass tube filled with an inactive gas, reducing the metal fatigue risk of the reed switch and prolonging its life. An encased reed switch is resistant to dust and moisture, as well as being corrosion resistant and explosion proof. Reed switches open and close in the presence of a magnetic field. For a reed switch to be used as a thermal switch, it must be used in conjunction with a material, such as thermorite, that generates a magnetic field based on changes in temperature.

The Curie point, discovered by French physicist, Pierre Curie, is the temperature at which certain magnets lose their magnetic properties. When employed in thermal reed switches, engineers discovered adding very controlled amounts of dopants was effective in manipulating a material’s Curie point.

Figure 3 also illustrates the operation mechanism of a break-type switch. An annular magnetic field is generated by the thermal ferrite at temperatures lower than the Curie temperature. This magnetic field induces N and S polarity in the contacts within the reed switch and creates a magnetic attraction force that makes the tips of the contacts touch, putting the switch into the closed or ON state.

When the temperature of the thermal ferrite reaches the Curie temperature, it loses its magnetic flux and becomes non-magnetic. Because the magnetic attraction force is no longer present, the tips of the contacts open, putting the switch into the OFF state.

The difference between a make-type and a break-type switch is the addition of a Gap Spacer between two sections of thermal ferrite. If the temperature does not exceed the trigger temperature, it generates a magnetic field that separates the contacts in the reed switch. When the temperature reaches the trigger point, it becomes non-magnetic. N and S polarity is induced in the contacts of the reed switch by the permanent magnets, creating a magnetic attraction force that causes the tips of the contacts to touch, closing the switch (ON). Figure 5 illustrates the operation mechanism of a make-type sensor. Excess heat poses a serious threat to the longevity of electronic components, and if left unchecked, it has the potential to cause damage or injury to operators. Thermal switches play a critical role in temperature monitoring, serving to shut down systems when their operating temperature exceeds a safe level.

They can simplify the design of temperature-sensitive control systems, and are more cost-effective than their thermistor and microcontroller-based counterparts, which depend on several additional components, including A/D converters, FETs, or relays.