There are several methods to operating a three-phase motor using single-phase power to make what would be an otherwise expensive and arduous process a little easier. 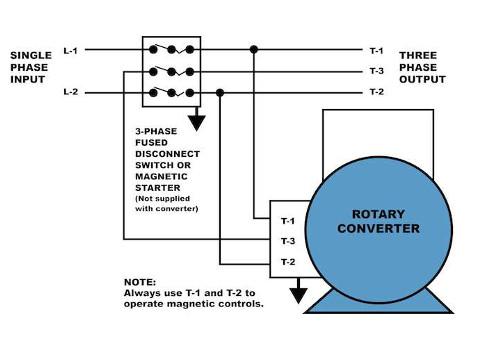 So, you told a neighbor you work with electrical equipment and now he thinks you can solve his problem because he or she bought a three-phase motor that can’t run on single-phase power. Being asked to convert this motor already sounds like more trouble than it’s worth. That’s not quite true though. There are some methods to make the process easier.

For this method, the capacitors must be appropriately sized for the load. The current will be unbalanced if it isn’t. Rather than the 120-deg phase shift depicted in the lower half of Figure 1, the incorrect pairing of the capacitor and load may result in a large deviation. The bigger the discrepancy, the lower the torque. Another viable method is with a rotary phase converter (see Figure 2). A wood shop, for instance, might use a rotary phase converter to run several three-phase machines on a single-phase power input. One drawback is that the process can be very expensive during the entire time the rotary phase is converting, regardless of whether any machinery is being used. The current might be balanced when specific machinery is running, but if few machines are operating, or all of them are heavily loaded, the three-phase power—current and voltage—is drastically unbalanced.

"NEMA Stds. MG 1: Motors and Generators" calls for motors to operate from voltage that is balanced within 1%. If the 10x rule is applied (percent current unbalance can be as high as 10 times the percent voltage unbalance) to a motor operating with 1% voltage imbalance, the current imbalance could be 10%. This is beneficial because a majority of three-phase motors running on a system described above are operating between 15% and 50% current imbalance. Even with the NEMA MG 1 derating graph (see Figure 3), no motor should operate with such a large current imbalance. A variable frequency drive (VFD) rectifies each pair of phases to dc and inverts the dc to the power for the three-phase output, which means a VFD can be used with single-phase input to operate a three-phase motor. Manufacturer support varies, and it is cautiously recommended to derate the drive by 1 divided by the square root of 3 (about 58%). Also note that the hp/kW VFD rating is there for convenience in sizing drives since they’re rated by current. For example, a 10 hp (7.5 kW) motor would use a VFD rated for 15 hp (11 kW). It is strongly recommended for the user to work with the drive manufacturer in selecting and sizing the VFD for this use.

Compressors, machine shop and woodworking equipment and decorative fountains are good candidates for this method. Rather than buying an expensive single-phase motor, changing the controls and dealing with speed control and starting torque issues, it is a better idea to use a VFD to operate the existing motor from single-phase power. For many applications up to 5 hp (4 kW), a suitable VFD can be purchased for far less than the cost of rewinding a three-phase motor and providing the necessary controls to operate it.

The additional benefits are that a three-phase motor is usually less expensive to buy, the controls do not require replacement or modification, and the VFD has the value-added bonus of providing speed control. Best of all, you don’t have to ruin a weekend helping someone who does not fully understand just what it is you do.